Dogs in Hot Cars: What to Do if You Find a Dog Locked in a Hot Car

We claim to be a nation of animal lovers. Yet, every year countless people leave their dogs in hot cars while they go about their business.

Even in mild temperatures, your car can become an oven, killing your dog at frightening speed.

There have been several hard-hitting campaigns published by various charities over the years. Still, thousands of us are willing to put our dogs at risk every year.

This is one of them from the Dogs Trust;

Despite these campaigns, the problem is getting worse;

People know of a dog that has come to harm after being locked in a parked car in hot weather.

Believe it’s ok to leave a dog in a car if they park in the shade or open their windows a a few inches.

Are more likely to leave their dog alone in their car than their phone (10%).

Of UK dog owners admit to leaving their dog alone in parked cars.

Were made to the RSPCA in 2018 reporting dogs had been left in hot cars.

In reports made to the RSPCA since 2016 about dogs left in cars.

(Statistics provided by The Dogs Trust)

How Long Does it Take For the Inside of a Car to Get Hot?

Some studies show that it takes around 30 minutes for your car to reach 40 degrees Celsius. This temperature can be fatal for your dog.

Other experts claim that it can take as little as 6 minutes.

The fact is, it depends very much on the outside temperature.

So as an experiment, we decided to lock Ben in our van to see how it felt. What happened was shocking:

The speed at which a dog will start to feel the affects of heatstroke will vary depending on a number of factors. Theses include

Long-haired breed, double-coated breeds and dogs with short noses are more at risk to heatstroke. Also, dogs that suffer from existing medical conditions might also be at higher risk.

The temperature in your car starts to rise quickly. Your dogs cooling mechanism kicks in and he starts to pant. In an attempt to dissipate the heat, his heart rate increases to push more blood to the surface of his body.

The blood vessels on the surface of your dog’s body dilate, expelling heat into the atmosphere. This causes his core blood pressure to drop, meaning less blood can be pumped around his body. As a result, his core temperature starts to soar.

Your dog’s blood vessels start to clot in an attempt to repair the thermal damage which is being caused. The reduced blood flow to the kidneys, caused by reduced blood pressure and micro-clotting, means they’re starved of blood. Similar damage occurs to the liver and gastrointestinal tract.

As the internal temperature of your car continues to rise, the thermal injury your dog suffers gets worse. This reduces blood flow even further. The thermal demands on your dog’s body and the damage to his kidney causes hypoglycaemia.

Extensive cell damage to multiple organs causes your dog’s blood to clot. The damage caused to his gastrointestinal tract worsens. This results in loss of blood through vomit, diarrhoea and gastric ulceration. Micro-clotting in the kidney and the release of toxins into the blood also causes renal failure.

Your dog suffers irreversible damage. The heat trauma and lack of oxygen to the brain causes an altered mental state. He’ll show signs of disorientation, depression and he might also go into a seizure and/or coma. If he hasn’t died already, the chances of him surviving are tiny.

Being the person who finds a dog locked in a hot car can be a difficult situation to find yourself in.

Trust us, we’ve been there!

So what should you do if you end up there?

First, only proceed if you feel you have the confidence to deal with the situation. Many people who leave their dogs in cars will come back angry when they see you interfering.

If you don’t have the confidence or the emotional stability to deal with the situation, ask someone to help.

You need to look for signs of heatstroke. Is the dog;

The RSPCA might not have an office in the area. Even then, they don’t have the power of entry and would need police assistance.

If the police aren’t available, what happens next is your call.

Many people’s instinct would be to break into the car and free the dog. If you decide to do this, be aware that without proper justification, you could find yourself in court or criminal damage.

Before you take any action, tell the police what you intent to do and why and ask for their name and badge number. Take photographs, a video of what happens and take the names and phone numbers of any witnesses.

The Criminal Damage Act 1971 Section 5(2)(a) states that you have a lawful excuse to cause the damage if at the time your break in;

If you think the owner of the dog would accept their car being broken into if they knew their dog was about to die, the law could be on your side.

This is our interpretation and is not meant as legal advice. We are not lawyers. Every situation is different and we cannot be held responsible for the actions you may or may not take. This is simply what we would do.

Emergency First Aid For a Dog With Heatstroke

We’re very aware that no one leaves the house thinking, ‘I’d better get some gear together, just in case I find a dog in a hot car…’

But by getting some help from witnesses or passers-by, this is very doable.

The steps are simple and could just save a dog’s life.

What the Law Says About Leaving Dogs in Cars

While the act of leaving your dog in a car isn’t illegal, animal cruelty is.

Dogs die in hot cars as a result of negligence. If a dog suffers or even worse, dies as a result of being left in a hot car, its owner could be prosecuted under the Animal Welfare Act 2006.

People have been sent to prison, fined and banned from keeping animals for leaving their dogs in hot cars.

At Pet Checkers, we’re doing our best to help educate dog owners and raise awareness about the dangers of leaving their dogs in hot cars. In doing so, we’ll hopefully reduce the number of dogs that die.

So please, share this article on Facebook, Twitter or any other social media. Please link to this page from your own websites and blogs and help us spread the word. 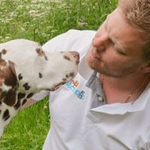 Ben Doyle co-owns Pet Checkers with his wife, Vicki. He spends his days looking after all kinds of animals, from dogs to eagles. When he's not taking care of animals, he's writing about them.

At Pet Checkers, we've been providing the very best pet care Lincoln has to offer since 2013.

PetCheckers.co.uk is a participant in the Amazon EU Associates Programme, an affiliate advertising programme designed to provide a means for sites to earn advertising fees by advertising and linking to Amazon.co.uk.

Additionally, PetCheckers.co.uk participates in other affiliate programs, Google Adsense and other advertiser networks and earns commissions through purchases and clicks through our website.

Pet Checkers uses cookies to improve your experience while using our site.

We'll assume you're alright with this, but you can turn them off if you prefer.

This website uses cookies to improve your experience while you navigate through the website. Out of these, the cookies that are categorized as necessary are stored on your browser as they are essential for the working of basic functionalities of the website. We also use third-party cookies that help us analyze and understand how you use this website. These cookies will be stored in your browser only with your consent. You also have the option to opt-out of these cookies. But opting out of some of these cookies may affect your browsing experience.
Necessary Always Enabled
Necessary cookies are absolutely essential for the website to function properly. This category only includes cookies that ensures basic functionalities and security features of the website. These cookies do not store any personal information.
Non-necessary
Any cookies that may not be particularly necessary for the website to function and is used specifically to collect user personal data via analytics, ads, other embedded contents are termed as non-necessary cookies. It is mandatory to procure user consent prior to running these cookies on your website.
SAVE & ACCEPT